50 Cent can no longer afford to take you to the candy shop. The “Disco Inferno” rapper, 40, appeared in court in Manhattan on Tuesday, July 22, to discuss his finances as he faces a $5 million lawsuit.

The musician is famous for rapping about his success and wealth with tracks like “P.I.M.P.,” “Straight to the Bank,” and “I Get Money,” but according to his new testimony, it was all a lie. The New York Daily News reports that 50 said in his session at the Manhattan Supreme Court that his image is manufactured.

PHOTOS: Celebrities Who Went From Rags to Riches

“It’s entertainment,” he said of the over-the-top lifestyle he promotes in his music videos, on social media, and in interviews — one that includes nights in swanky clubs, rides in luxury cars, and stacks upon stacks of cash.

The star, whose real name is Curtis Jackson, revealed that he doesn’t own many of the cars in his arsenal such as a Bentley and Ferrari, saying, “Those cars were rented.” He added that he “borrowed” much of his other swag, including diamond jewelry. 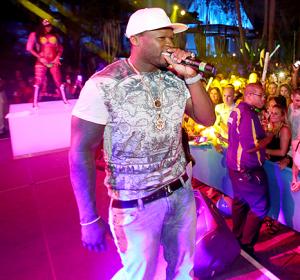 50 Cent celebrates his birthday at The Pool After Dark at Harrah’s Resort on July 8.

Fifty, who said he has only “a few gold chains” officially to his name, went on to explain that he’s paid 10 cents per record for his music sales, and took home totals in the low six figures for his recent big-screen appearances in Spy and Southpaw.

The G-Unit performer went so far as to file for bankruptcy earlier this month, but still seems to be in good spirits despite his financial troubles. He smiled as he walked up to the courthouse on Tuesday, and spoke candidly to Conan O’Brien about the state of his wealth in an interview last week.

“I need protection,” he said on Conan of his filing. “You look like you’re doing okay… I gotta be frank with you… You know, you get a bullseye pinned on my back. When you’re successful, and you’re publicly known, you become the ideal person for people to have lawsuits for.”